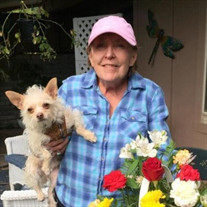 Jacquelyn (Jacquie) Marie Moore, 81, of Carson City, Nevada died on March 20, 2022 at The Lodge Assisted Living and Memory Care Community in Carson City. Jacquie was born on October 2, 1940 in Urbana, IL to Edgar Ellis Moore and Lucille Josephine (Brzezinski) Moore. She attended St Mary’s Catholic school and graduated from Urbana High School in 1958. She received a Bachelor of Arts degree in English / Speech from the University of Illinois in 1962 and a Master of Education degree from the University of Nevada, Las Vegas. She was a member of Gamma Phi Beta sorority while at the University of Illinois. She first taught High School at Morton West in Berwyn, Illinois and then moved several times while married to Michael P. Stowers. Throughout her career, she taught at high schools in Denver, Colorado; Fairbanks, Alaska; and Las Vegas, Nevada where she was the Chair of the English Department at Chaparral High School and later Green Valley High School. When she moved to Carson City, she worked as the Language Arts / Fine Arts Consultant for the State. Her philosophy was “It is the responsibility of teachers to do their best to give all students an education that prepares them to do what they might want to do in life, whether that is to go to work directly from school, go to a technical school, or to any other form of higher education.” Jacquie was a spunky and boisterous mother and grandmother who liked to play cards, travel, read, and laugh. She took her son on his first white water rafting trip and taught him how to ride horses. She loved to have coffee with her friends and was an avid movie goer. She was always up for an adventure and lived her life fully. Jacquie was preceded in death by her parents. Survivors include her son, Kirk Stowers, daughter-in-law, Michelle Stowers (Hall), grandson, Charlie Stowers and granddaughter, Ruby Stowers all of Henderson, Nevada; her sister, Tammie Bouseman and nephew, William Bouseman of Urbana; and her long-time companion and caretaker Chris Perdue of Carson City. Services will be held in Carson City, Nevada on Tuesday, April 12, 2022 at 3:00 p.m. at Autumn Funeral and Cremations.

The family of Jacquelyn Marie Moore created this Life Tributes page to make it easy to share your memories.