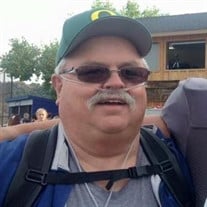 Henry Michael “Mike” Campbell On Sunday, September 30th, 2018 at 1:38pm, Mike Campbell,68, of Virginia City, Nevada passed away peacefully surrounded by his loving family at Carson Tahoe Hospital in Carson City, Nevada. He was born on March 3rd, 1950 in Walla Walla Washington to Robert Edwin “Bob” and Donna Maxine (Strobel) Campbell. Mike was raised alongside his brother and three sisters on their family farm that was just north of Pendleton, Oregon. Starting from a young age, Mike always stayed involved in his community. While in School, he played basketball, football, ran track, and he was the Student Body President. In June of 1968, he graduated from Griswold High School in Helix Oregon. After High School, Mike went on to graduate from Blue Mountain Community College in Pendleton, Oregon, where he continued to be involved as a member of the FFA, the Student Government and Circle K. In the Spring of 1970, he met the love of his life, Patricia Lee “Patsy” LaFromboise. A few months later they would celebrate their love by getting married in the Community Church in Helix Oregon on July 3, 1970. This was a big celebration for both families, even his cousin Henry (who Mike was named after), closed the family service station, Campbell Service Station, to attend. In 1971, Mike would go on to work for Prowler Travel Trailer and during that time he and his loving wife would welcome their first child into the world, Robert Joseph. In 1973, Mike had an accident that would cause him to lose half of his ring finger. Their family of three grew by one during the winter of 1975, when they welcomed a beautiful baby daughter named Anita Dawn. After much thought and consideration, Mike decided to leave Prowler to pursue a career in farming. Before going to work by his father’s side, he started his career off at the Reese family farm, located north of Helix, Oregon. Their family grew again in 1983 when they welcomed their baby boy Michael Douglas. Mike was very active within the Helix community. He served a bus driver and custodian for the school district, the President of the Chamber of Commerce, the President of the Volunteer Fire District, and he was elected as Mayor of Helix. He was very instrumental in getting a fire station built in Juniper Canyon, just north of Helix. Mike also gave back to the kids of the community, as he volunteered as an umpire and a coach in the Tri-Angle Little League. In addition to giving back to the community, Mike enjoyed going hunting in the beautiful Blue Mountains just outside of Pendleton and he loved fishing at Jubilee Lake with his family and his beagle, Henry In August of 1997, Mike and Patsy, made the decision to move to Nevada to be closer to their daughter Anita and their first-born grandchild, Tiffani Marie. While in Nevada, Mike went to work from the Storey County School District in Virginia City, Nevada. While working for the school district, he found his true passion working with the Nevada Classified School Employees Association as part of the American Federation of Teachers-PSRP-AFLCIO. Mike spent countless hours lobbying, training, negotiating for better pay, work environments and fair treatment of its members. During their first few years in Nevada, their family welcomed two more grandkids; Bailey Robert and Tyler Joseph . A few years later, their son Robert adopted three more grandkids in the family; Scott, Jessica and Lowell. Mike was survived by his loving wife of 48 years, Patsy of Virginia City. Son Robert of Pendleton Oregon. Daughter, Anita Curtis, Son Michael both of Virginia City Nevada. Niece Geneva (Andrew) Timpy of Irrigon Oregon. Sister Bernice (Paul) Good of Walla Walla Washington and Sister Donna (Harold) Wick of Colton Oregon. Grandchildren Tiffani Curtis and Tyler Curtis both of Virginia City Nevada, and Bailey Campbell of Pendleton Oregon, Scott Campbell of Iowa, Lowell Campbell of California. Brothers and Sister in laws, Linda (Ben) Bennett, Liz McKinney, Ron (Lisa) LaFromboise, Zola (Patrick) Green, Jenna McBroom, Tim (Kathy) LaFromboise, John (Linda) LaFromboise. Countless nieces, nephews, cousins and friends. He was preceded in death by his Father Robert, Mother Maxine, Brother Bobby, Sister Susan and Granddaughter Jessica. Mike was a loving husband, an amazing father, the best Papa ever, a beloved member of the community and a diehard Oregon Ducks fan! Arrangements are in the trusted care of Autumn Funerals and Cremations in Carson City. Services will be planned later this month in Nevada and in the Spring of 2019 in Oregon.

The family of Henry Michael Campbell created this Life Tributes page to make it easy to share your memories.