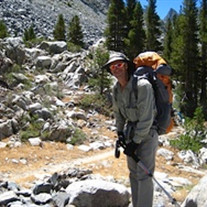 Gary Dankworth began life as an adventurer Nov. 18th, 1951 and continued the adventure until July 28th, 2012. Born in Los Angeles, California to Richard and Carla Dankworth, he moved to Reno in 1955. He graduated from Reno High School in 1969, and received a full-ride scholarship in athletics and academics to the University of Washington, majoring in mechanical engineering. Gary was injured pole vaulting, and while recovering from his injury and undergoing physical therapy, Gary started reading his roommate’s medical books and decided to become a doctor. He then went to University of Nevada, Reno for 2 years of medical school, transferring to UC Irvine and graduating with a doctorate in medicine from the University of California, Irvine in 1977. It was during this time, living in Southern California, that he quickly developed a passion for surfing. He completed his internship at UC Davis Medical Center in Sacramento, where he met the love of his life, Ann an RN. They were married on June 24, 1978, the day he completed his internship, and moved together to Redding, California, where Gary completed a 2 year Family Practice Residency program. Gary and Ann started their first practice in Reno, Nevada, joining Gary’s family doctor, Dr. Lombardi, who so graciously welcomed them and taught them everything they didn’t learn in medical school. A year later, Dr. Brian Sonderegger introduced them to an opportunity in Carson City, Nevada. Gary and Ann joined Family Medical Group in 1981 and moved to Carson City, Nevada. Gary loved the fact that he could ride his bike to work and he only had to make rounds at one hospital, instead of three. In March of 1983, Gary decided to go into solo practice and opened his office on 812 N. Nevada Street, where he faithfully and The best way to describe Gary is motion in action. As a child, he took apart a pair of roller skates to make a crude skateboard. He hung his brother out the window of the car to see motion in action, and later as an adult, he set a 20 year state records in high school pole vaulting. He continued pole vaulting in college and made the top 8 in NCAA National Championships. Gary also participated in varsity football, basketball and track. When he felt the wind, he felt God’s presence, whether cycling, wind surfing or skiing. His many hikes and climbs filled him with the awe of God’s presence and vastness. Gary continually sought the next mountain to summit. His last summit began the morning of July 28th, 2012 after he departed from his climbing friends, going ahead of the group and setting his backpack at a base camp, he began a solo ascent. After 13 hours of rigorous class IV climbing, he summited Norman Clyde peak and signed the registry at 8:30 pm. As Mark Twain said, “The air up there in the clouds is very pure and fine, bracing and delicious. And why shouldn’t it be? It is the same the angels breathe.” Gary’s victory on top was short, but knowing him, he would have offered up a prayer of thanksgiving and paused in silent wonder before his fatigued body began the descent. His friends expected him at base camp that evening, but he never returned. After five agonizing days of searching, a helicopter located Gary’s deceased body. Circumstances indicate that shortly after reaching the summit, he fell several hundred feet. Gary’s life was sustained by a deep faith in God, the Creator of all good and beautiful things. He worshiped God in nature and loved to lead and participate in worship with his guitar and musical giftings. This heart of worship has been exemplified in his home and continues to live on in the hearts of his four grown children, Bria, Jason, Quentin and Annelise, all of whom have been involved in missions and leading worship in various capacities. Gary led his family by example and was an involved, caring and supportive father. He recently shared one of the greatest blessings his life had brought him was being able to watch his children come into adulthood and become his friends, offering encouragement, accountability and advice. His venture as a grandpa had only just begun, it was not uncommon for him to put a grandchild in his backpack for extra weight and take off on an expedition, all the while the grandchildren thought it some wild adventure, talking incessantly. He was intrigued with where life would take his children and grandchildren, and always wanted to be involved with the moving forward of their lives. We know Gary’s legacy will live on through the many people he touched, especially through his grandson Emery, whose favorite saying is, “Take it to the limit one more time.”

Gary Dankworth began life as an adventurer Nov. 18th, 1951 and continued the adventure until July 28th, 2012. Born in Los Angeles, California to Richard and Carla Dankworth, he moved to Reno in 1955. He graduated from Reno High School in 1969,... View Obituary & Service Information

The family of Dr. Gary Steven Dankworth created this Life Tributes page to make it easy to share your memories.