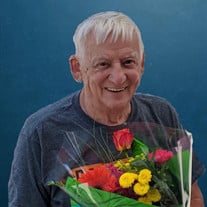 Frank Joseph Abend September 17, 1939 December 28, 2020 We said goodbye to our dad, Frank Abend, for the last time on the evening of December 28, 2020. Frank was born on September 17, 1939, in Wilkes-Barre, Pennsylvania to Lewis and Della Abend. Frank spent his formative years in Pennsylvania at St. Boniface and G.A.R. Memorial High School (class of 1957) before joining the Navy. In the spring of 1961, Frank made his way to Lake Tahoe where he met the love of his life, Eddie, to whom he was married for 54 years and began a fifty-plus year career in gaming before retiring in 2011. Frank was fun-loving, had an incredible knack for making others laugh, and was one of the kindest and most giving men to anyone who had the good fortune to know him. He was an amazing father and a caring husband who was spiritually strong and compassionate and had a clever sense of humor. Above all, he loved and cherished his family and friends. We love and will miss him more than words can express. Frank is survived by his sister JoAnn Burns of Wilkes-Barre: five children, Rick (Kelly) of Reno, Ron (Carla) of Spokane, Rhonda of Carson City, Dave (Sue) of Las Vegas and Mike of Houston; six grandchildren Jessica, Amanda, Chris, Kaleb, Sophia and Aidan, and two great-grandchildren Kiley and Kiason. He was preceded in death by his wife, Edna “Eddie” Abend in 2018, his parents, Lewis and Della, brothers Bernie, John “Jay”, Louis, and Joseph and sisters Ruth, Delphine, and Mary. Funeral services will be held at St. Teresa of Avila Catholic Church in Carson City on January 15, 2021, at 4:00 p.m. and for those wishing to participate but not able to attend, you can do so by joining via Zoom. To attend Frank's service virtually via Zoom, click the link below: https://us02web.zoom.us/j/81419809240?pwd=dS9wQUNwOG1xUTIxelQyQWJHRHJFUT09 Meeting ID: 814 1980 9240 Passcode: Frank

The family of Frank Joseph Abend created this Life Tributes page to make it easy to share your memories.