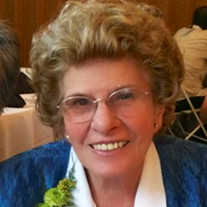 Evelyn was born in New York City, moved out West in the 1950s. First stop was Oakland California where husband Burt got a job with the railroad. Later, an opportunity to transfer to Lovelock Nevada came up and the family moved again. Eventually, we moved to Reno, then to Sparks and then in 1969 the couple purchased an acre of land in Old Washoe City. We built a home while living (with 5 kids) in a 55-foot single-wide almost 2-bdrm 1-bath mobile home…Needless to say, we were all anxious to move into the new digs. But once again wanderlust settled in and Burt and Evelyn with the only child still at home, Earl, set off for Yakima Valley in 1978 for a 25-acre parcel planted in grapes for sale to Welch’s. Years later, as Burt’s health began to wane, they sold the “farm” to Earl and came back to Nevada finally settling in Silver Springs. Evelyn always worked. Upon arriving in the Reno area, she originally worked for Arch Drug Store Downtown as a waitress. Later, she worked as a line worker in a factory making perfume bottles, in another making children’s toys like pop beads. While in Reno she worked for Lynch communications and Baker and Taylor books. While in Washoe Valley she worked as a bookkeeper for the State of Nevada Health Division in Carson City. Then Burt opened a lumber business in Washoe Valley and mom became the sawyer. She worked a 12” cross cut saw cutting 2x6 and 2x8 lumber for making porch steps for trailer houses, and tens of thousands of board feet of pecky cedar fencing. Burt would bring home truckloads of lumber, 6x6 cedar posts 16’ long, some weighing well over 100 pounds and the workers at the yard marveled at how my mom could always carry her end of anything, no matter how heavy. Once settled in Silver Springs she got on at Amazon.com in Fernley. Despite her age, they loved her. She always worked hard wherever she worked and whatever she was doing. In 1997, Burt, during a magnificent fist fight with a man 20 years his junior, fell off a curb and had a compression fracture in his back. He was prescribed extra-strength (brand name acetaminophen) and by the time the doctors figured out why he kept getting sicker and sicker, the poison had ruined his liver and mom cared for him at home until he passed in 1998. Grandma Fifi, Evelyn’s mom, had lived with Evelyn’s family since the early ‘70s and trapsed around the West with the family for 30 years. When Grandma was diagnosed with Alzheimer’s Evelyn, once again became care giver, gave up her job at Amazon and nursed Grandma in their home in Silver Springs until Fifi finally passed away some two years later. In 2004, a romance seemingly made for television unfolded as Evelyn’s matchmaking hairdresser decided that Sylvester Kelley, another client, and Evelyn may be just right for each other. Daughter Linda remembers Evelyn saying one evening, “And he tried to kiss me, and I told him, hold on buddy, you’re moving way too fast.” Linda’s retort, “Mom, he’s 80 years old. You don’t have time for long romance.” So in December 2004, Evelyn once again became a beautiful bride. They were perfect together, like a couple of teenagers experiencing their first loves. They were adorable and remained so until Kelley passed three years ago. Evelyn was never sad, rarely mad and always moving. She loved working in her yard, writing little poems and doing crossword puzzles. She was incredibly intelligent, an amazing mom, albeit a bit old fashioned and bossy. She was a wonderful Grandma to all of us and anyone else who needed one. Up until a month before her passing, she was, again, a caregiver for elderly folks in the Silver Springs area travelling to their homes and giving the home care they needed. So yes, Evelyn was predeceased by two wonderful husbands, (at different times, you see) Burton Stiteler and Sylvester Kelley, sisters Mary Weiss and Lillian Willis. She is survived by sister, Laura Reisman, children, Linda Harrison (Dan,) Karen Spencer, Mary Hall (Rex,) Fred Stiteler (Debbie) and Earl Stiteler (Jen) and many grand and great grandchildren. Mom, grandma, Evelyn, we love you very much.

Evelyn was born in New York City, moved out West in the 1950s. First stop was Oakland California where husband Burt got a job with the railroad. Later, an opportunity to transfer to Lovelock Nevada came up and the family moved again. Eventually,... View Obituary & Service Information

The family of Evelyn Marie Kelley created this Life Tributes page to make it easy to share your memories.