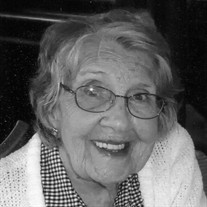 Evelyn “Tootie” M. Erickson, age 95, passed away peacefully on February 21, 2019, of natural causes in Lafayette, Colorado. She was born in Orion Township, Richland County, Wisconsin on March 24, 1923 to Christof A. and Delila L. Kraak. Having five sisters meant her dad was outnumbered 7:1 Evelyn graduated from Nursing school and then married Warren O. Erickson on March 14,1945 in Richland Center, Wisconsin. They were joyfully united for over 61 years and shared in raising a family, were partners in golf, dancing, and bridge, and enjoyed many travel adventures together near and abroad. Evelyn had lots of energy and her children thought of her as the “Energizer Bunny.” She and Warren's biggest adventure was starting a small manufacturing business in their late 40s which supplied gelcoat and resin for pleasure boats, furniture and the first Disney World rides. Upon retirement, they moved from Plantation, Florida to Carson City enjoying the outdoors, exploring historic sites, and taking short trips. After she was widowed in 2006, Evelyn moved back to Florida to be near her youngest daughter and son-in law and in April 2018 took up residence in Colorado to be close to her son's family. Evelyn is survived by her son and daughter-in law Richard and Marlene Erickson of Broomfield, CO; daughters and sons-in-law Diane and Steve Lengauer of Reno, NV, and Deborah and Glenn Downs of Palm City, FL;five grandchildren and five great-grandchildren. She has one surviving sister, Charlotte Smolka, Manitowoc, WI. Memorial donations may be made to St Paul's Lutheran Family, 1201 N. Saliman Rd, Carson City, NV 89701

The family of Evelyn Marjorie Erickson created this Life Tributes page to make it easy to share your memories.