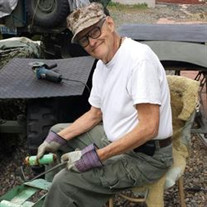 Life Legacy Donald Eugene Podlas, husband for nearly 55 years, father of four, grandfather of 15 and great grandfather of eight and friend to many, many people, returned home to his lord and savior on June 1, 2016. Born on March 25, 1936 in Newark, New Jersey, Don lead a remarkable, meaningful and complete life. Don moved from New Jersey to southern California in his early teens. He graduated from Compton High School. Not far after graduation, Don enlisted in the Marine Corps where he was honorably discharged. His time served, commitment and pride for serving his Country and the Corps would remain with him his entire life. Don married the love of his life Marie (Senteno) Podlas in 1961. Ever inseparable, Donnie and Marie collaborated in business, art projects, charity work, church events and most importantly, raising his, in Don’s words, gorgeous daughters – Cynthia, Sandra, Donna and Lisa. Don committed his life to caring and providing for his family. While not often said, Don demonstrated that “family was his crowning achievement.” His entire family knew and felt it too. Not long after his military service, Don became a fireman for the City of Vernon. He spent nearly 19 years serving the community where he retired as a Fire Captain in 1978. During his service, Don used his film and photographic hobby to document fire and other emergency situations. He carried his cameras with him everywhere, recording events. Eventually, this ‘hobby’ turned out to be a regular added duty to his Fire fighter career. Aside from documenting emergency calls, the film Don shot was often used in fire training videos, accident and insurance claims and news footage. Some of his work even showed up in television shows such as Murder She Wrote, Squad 51 and CHIPs, and on the big screen – Towering Inferno. Ever the entrepreneur, Don produced “Fire Combat” a collection of film shot during his documentary efforts. After retirement, Don moved to Lake Tahoe area. He spent time working in Real Estate, then finally focusing on passion projects and retirement. In his later years, Don served admirably in the Marine Corps League serving as the post’s commandant and, proudly, as it’s Chaplain for 28 years. He was a constant at meetings, preparing blessings, organizing parade and other tributes such as the Toys for Tots. He redirected his creative filming talents toward making replica cannons used for parades and special events. Don was talented and often replicated complete cannons without any engineering drawings; just photographs. He proudly used his cannons during celebratory parades, pulling them using his Willy’s Jeep, blasting self-made black powder charges with a loud BOOM and cloud of smoke to the delight of parade goers. Don grinning his big teeth smile and waving to all. Don was honored earlier this year by Nevada Governor Brian Sandoval as Veteran of the Month recognizing servicemen and women who went above and beyond the call of duty outside of military service (article link below). Don also gave much to his church and religious beliefs. As a devote Catholic, Don was a founding member of St. Anne’s Church. He attended morning mass nearly every day, often arriving early to make coffee and prepare for services. Many times he would give Eucharist to members who were ill and couldn’t make it to church. He was always there volunteering his time and helping others. Don’s example for living life with zeal and purpose, humility and humbleness, caring and serving others cannot be understated. He simply was a model human.

Life Legacy Donald Eugene Podlas, husband for nearly 55 years, father of four, grandfather of 15 and great grandfather of eight and friend to many, many people, returned home to his lord and savior on June 1, 2016. Born on March 25, 1936 in... View Obituary & Service Information

The family of Donald Eugene Podlas created this Life Tributes page to make it easy to share your memories.