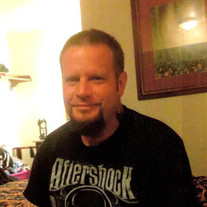 David Craig Romesburg was born on January 1, 1976 in Reno Nevada. He lived with his father, Craig David Romesburg, his mother Debra Romesburg and his two twin sisters Maria Hurst and Cristal Cooper, in Carson City Nevada. David attended Carson High School and lettered in Wrestling. He was the top wrestler in his class. David moved from Carson City to Reno at the age of 18 and traveled with friends until he met his wife Veronica in 2004. David and Veronica married in September 22, 2006. David loved his family. Even though he may of been traveling or enjoying life, he never missed a holiday or his sisters birthdays, this was always a date he did not forget. David settled down in Carson City with his wife Veronica, his two step daughters, Katie Fletcher and Crystal Hanson and his grandaughter Natalia Lopez. David enjoyed being a "papa", his grandaughter was a part of his everyday life. David loved being with his wife Veronica and they enjoyed listening to music, hanging out with friends and family. He was in love with Heavy Metal music, he couldn't go a day without listening to his music, this was a big big part of his life. He also enjoyed watching Michigan State College Football with his father in law Keith Fletcher. David spent the last few years just taking care of his beautiful wife Veronica and grandaughter. They where together every minute of every day. There love was a love that only comes once in a lifetime and no one could of ever broke the bond between them. David is proceeded in death by his father Craig Romesburg, his grandfather, Robert Lawson, his uncle Kurt Romesburg, his aunt Kathy Davis, and his grandmother Caroline Romesburg. David is survived by his loving beautiful wife, Veronica Romesburg, his mother Debra Romesburg, his twin sisters, Maria Hurst and Cristal Cooper, his grandmother Eleanor Lawson, his step-daughters Katie Fletcher and Crystal Hanson, his grandaughter Natalia Lopez, his brother in law Chris Cooper, his father in law Keith Fletcher, his nephews Kyle Hurst, Christian Cooper, Donald Hurst, Ryan Hurst, his niece Brianna Hurst, his Great Newphews, Aiden Hurst and Braxton Hurst, his uncles Raymond Lawson, Daniel Lawson, and Robert Lawson. He also had many extended family members, cousins, and friends. David will always be remembered for his loving caring heart, his laugh that could fill up a room, his love forHeavy Metal music and his fun loving spirit. He was a friend to all that needed him and was never just a phone call away for a helping hand. He will be forever missed by so many. He left an imprint in your heart in whomever's life he touched. May you rest in peace and know that as we love you from here on earth, may you carry your love for us and watch over us from up above.

The family of David Craig Romesburg created this Life Tributes page to make it easy to share your memories.