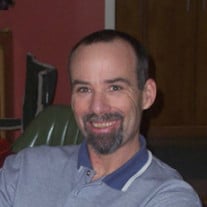 David M. Dahlinger, 52, after a lengthy illness left his earthly body and into the arms of his Lord and Savior, Jesus Christ on December 29, 2014. He was surrounded by those who loved him. David was born July 2, 1962 in Lodi, CA to David Dahlinger and Janet Tetz. Both parents preceded him in death. Also preceding him in death are grandparents, Dave and Phyllis Dahlinger and Daniel and Martha Tetz. David moved to northern Nevada in 1971 and attended Carson City schools, graduating from Carson High School in 1981. In his early work career he was employed by Mayfair Market eventually transferring to their Elko Nevada store. This is where he met his ex-wife Cheryl Hannig. They had two children; Christine and David, Jr. After leaving Mayfair Market, David returned to Carson City and attended the University of Nevada, Reno earning his Bachelor of Science degree in Geological Engineering in the winter of 1994. He worked for Newmont Mines in Elko and then the Nevada Department of Transportation in Carson City. Throughout his illness, David never complained and when asked how he was he would often reply AWSOME! Before his illness debilitated him, he was an avid outdoorsman and enjoyed hunting, fishing, camping, hiking, and mountain biking. Many of these activities were enjoyed in various mountain ranges throughout Nevada, but David was particularly fond of the Carson Range of the Sierra Nevada and the Ruby Mountains. He also enjoyed hitting a bucket of balls at a local golf course. David is survived by his children, Christine McNeil (Nick) and David, Jr.; grandchildren, Robert and Christian Vega and Ava McNeil; loving and devoted sister, Dawn Berger and brother-in-law, David; nephew and niece, Nathen and Katelyn (Darren) Berger; Aunt Roberta Jones, Lodi, CA, Uncle and Aunt Frank and Elizabeth Tetz, Carson City, Uncle Warren Tetz, OR, and Uncle Ronald Tetz, CO. He is also survived by numerous cousins and other extended family. The family would like to thank those nurses and staff at Mountain View who cared so much for David. We would also like to recognize the nurses and staff of Gentiva Hospice. Thank you for ensuring David’s final days were peaceful. You are truly angels on earth! A private memorial service will be held in early summer. If you wish to make a charitable donation in David’s memory please do so to either: Gentiva Hospice, 710 W. Washington St., Carson City, NV 89703 or the Huntington’s Disease Society of America, 505 Eighth Ave., Suite 902, New York, NY 10018. Contributions may also be made online at www.hdsa.org. Autumn Funerals & Cremations is trusted with the arrangements. I lift up my eyes to the mountains—where does my help come from? My help comes from the Lord, the Maker of heaven and earth. ~ Psalm 121:1-2

David M. Dahlinger, 52, after a lengthy illness left his earthly body and into the arms of his Lord and Savior, Jesus Christ on December 29, 2014. He was surrounded by those who loved him. David was born July 2, 1962 in Lodi, CA to David Dahlinger... View Obituary & Service Information

The family of David Michael Dahlinger created this Life Tributes page to make it easy to share your memories.

David M. Dahlinger, 52, after a lengthy illness left his earthly...