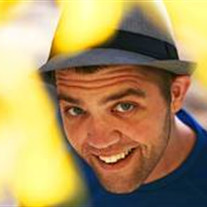 David Jonathan White, while only 27, lived an amazing life and touched many in the process. David was many things to so many people the following thoughts provided to us attempt to describe who he was: Explorer – from the time David was a small child he loved exploring or “adventuring” as he called it. No matter where he went he would find treasures and his pockets were always stuffed with them. It made doing laundry a challenge. As he became an adult his love of exploration went beyond searching out mountain tops, stream beds, gullies, rifts, wildlife, and fault scarfs. He explored belief systems, friendships, or politics with equal passion. He is likely still exploring today and continually being amazed at the wonders he must be experiencing. Idealist & Artist – with David, these two went hand in hand. Always striving for how things should be, and not how we necessarily find them. It was obvious in his photography and in his discussions on life, love, and faith. Stubborn – When David believed in something, while he enjoyed an intelligent discussion on the topic, he would stick with his belief unless a logical argument would cause him to change. Many believe it was this stubbornness that allowed him to have an amazing year after being diagnosed with stage 4 colorectal cancer. Self-pity was not in his nature and he only allowed himself to look forward. Photography – Brilliance, creative, a natural eye for capturing the best of any scene, or any person. His passion shined through and rarely was there a time when his camera was not around his neck or holstered to his hip. Even while receiving Chemo, or in the hospital his camera was present and even in that environment he managed to take some amazing pictures. Forza – David was a gamer with family and friends. Whether he was in Alaska, SoCal, or Nevada he managed to make time to play online. It kept him in touch with some of those he loved most in this world. Mazda – 3MAZDA3. David’s little red car had countless miles on it including the 3500 mile trip up the AlCan highway to get it up to Alaska. He and his brother Jeff spent hours detailing, repairing, and improving his car. Folks were surprised when he decided to drive his lowered Mazda up the AlCan, but his did it and without a scratch! Magic – with his brother, little sister, and many friends they spent hours bonding in two different states playing magic. Star Wars – David was a confirmed Star Wars fan and he had collected all the movie sets, many of the collectable figurines, and various books on the topic. If you needed the answer to any Star Wars trivia question…he was the man to see. Bowler – David loved bowling! He could find joy in so many things and bowling was definitely one of them. Adventurous – His love of hiking and the courage to do many of them solo attest to his amazing strength. His summits of White Mountain, and Mt. Matanuska were two of his favorites. All Smiles – David’s natural tendency was to be happy, and even when faced with daunting challenges he met them with humor and a quick wit. Even as he knew his struggle was ending and the days ahead were few he managed some quick witted comments that kept everyone smiling. Loving – One of David’s most endearing qualities was his ability to make others feel loved. David wanted each relationship to be special. Whether it was his blood brother Jeff, his step brother & sister Marc and Kristy, or his adopted younger sister Tiffany…they were simply his brothers and sisters. And in loving others he found his truest passion in life – Taylor. His heart will forever belong to this amazing young lady who stayed by his side until his last breath. LIVE – David had a final message for everyone to turn off those TV’s and get outside and LIVE life. Be engaged with it, be a part of it! Let’s all honor him with this request, for if we do, the world will be the better place that David knew it should be. David IS > cancer!

David Jonathan White, while only 27, lived an amazing life and touched many in the process. David was many things to so many people the following thoughts provided to us attempt to describe who he was: Explorer &#8211; from the time David... View Obituary & Service Information

The family of David Jonathan White created this Life Tributes page to make it easy to share your memories.

David Jonathan White, while only 27, lived an amazing life and...