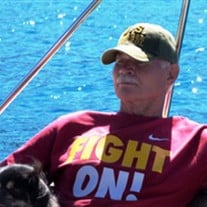 Dar Cudney passed away peacefully in Carson City, Nevada on December 19, 2013. He was 76 years old. Dar was born on September 3, 1937 in Central City, Nebraska to Leonard and Eunice Halleck Cudney. He moved to Southern California with his family at a young age and grew up in Westchester, California near the beautiful beaches of Santa Monica and Playa del Rey. A superior athlete from the day he was born, he excelled at football, playing for Westchester High School’s Varsity team where he was named Most Valuable Player. High school friends fondly called him the “King” the rest of his life. He graduated from Westchester High in 1956. After attending Santa Monica City College, completing a two year tour of duty in the United States Army, Dar married the love of his life, Gail Smith, also of Westchester, California, and went to work for Edison International. He had a long and successful career, respected by many, and retired at the age of 55. Dar was an amazing and talented man who completed just about everything he wanted to in life. Avid and accomplished pilot, boater, water skier, snow skier, and all around great athlete, he built a house, built an airplane hanger, owned a plane and flew across the country, owned a boat and skied the lakes of California and Arizona, and as a close friend describes, in the immortal words of Frank Sinatra, “I Did it My Way.” Larger than life, Dar was, and is, a wonderful husband, father, and friend – loved, gone too soon, will be terribly missed, but never, ever forgotten by family and friends. Dar is preceded in death by his parents, his brother, Gayle, and his sister, Gwen. He is survived by his wife, Gail, his daughter, Julie, his sons, Bill and Jim, his grandsons, Billy and Cody, his older brother, Larry, and his younger sister, Marilyn.

Dar Cudney passed away peacefully in Carson City, Nevada on December 19, 2013. He was 76 years old. Dar was born on September 3, 1937 in Central City, Nebraska to Leonard and Eunice Halleck Cudney. He moved to Southern California with his... View Obituary & Service Information

The family of Darwin Wesley Cudney created this Life Tributes page to make it easy to share your memories.