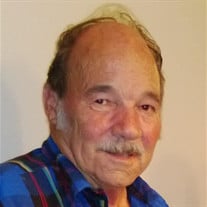 Daniel Vernell McGath Jr, of Crescent City, CA passed away unexpectedly at Carson Tahoe Regional Hospital in Nevada on November 3rd 2018 at age 75 with his family by his side. Dan was born on November 19, 1942 in Bloomington Il to Daniel V Sr and Marian E McGath (Miller). He graduated from Rubidoux High School. On August 25, 1962 he married his lifelong partner and wife of 56 years, Linda Marie Rogers in Riverside CA. They welcomed two daughters into their home, Lisa and Cynthia and instilled in them the values of family, love and life skills. He worked at several jobs, Gladding McBeam/InterPace, Rohr Aircraft, Sheet Metal Journeyman, Jurupa Community Services Dist. Then the job/career he loved and was well respected at and for, California Department of Forestry & Fire Protection for 28 years. He retired as Fire Crew Captain from Alder Conservation Camp in June of 2000. He loved his family and did everything he could to guide them and encourage them to do their best. He was strong but always loving and kind, wanted the best for them. He built his home in Crescent City with the help of family and many, many friends, for which he was eternally grateful. He loved his family and friends and was always willing to help/lend a hand when needed. He enjoyed camping with family and friends, going to Arizona to visit family and go gold prospecting (never found much but enjoyed the adventure/hunt). He was well respected and highly thought of by family, friends and community. He is survived by his loving wife Linda, daughters Lisa McGath, Santa Rosa, CA; Cynthia DeSomber (Earl) Smith Valley, NV; grandchildren Justin Sturdevant, Portland OR; Jared McCasland, Eureka NV; Derrick DeSomber (Stevie) Crescent City CA; Nicole DeSomber, Crescent City CA; Ryland DeSomber, Reno NV. Great grandchildren Brantley and Ryder McCasland Eureka NV; Brooke and little Miss Hazel DeSomber (due in Feburary 2019. Brother Michael McGath (Vickie) McGath, Brother in law Jet Rogers (Melody) Wickenburg AZ. Numerous Nephews and Nieces. As well as all of the very close friends he has made through the years and was truly blessed by each and every one of you Preceded in death by his father and mother, Daniel Sr and Marian McGath and sister Patricia Ann McGath, sister in law Connie Stackhouse and brother in law De Rogers. A Celebration of Life will be held on December 1st 2018 at Crescent City Fire Station 255 W. Washington Blvd, Crescent City, CA at 2:00 pm. In Lieu of flowers memorials may be made to the CDF Firefighter Benevolent Fund, c/o CAL FIRE Local 2881, Headquarters Office, 1731 J St, Suite 100, Sacramento CA 95811 or the Alzheimer’s Association. Condolences/cards can be sent to: 6 Siegel Court, Wellington NV 89444

Daniel Vernell McGath Jr, of Crescent City, CA passed away unexpectedly at Carson Tahoe Regional Hospital in Nevada on November 3rd 2018 at age 75 with his family by his side. Dan was born on November 19, 1942 in Bloomington Il to Daniel V... View Obituary & Service Information

The family of Daniel Vernell McGath Jr created this Life Tributes page to make it easy to share your memories.