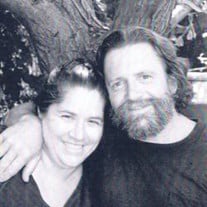 Life Legacy Craig was born on April 17, 1956 to Donald and Carolyn Romesburg, in Carson City Nevada.  Craig lived in Carson City with his parents until he moved to Reno Nevada where he attended Wooster High School until he graduated. Craig went on to become a Commercial Truck Driver for Glasier Brothers (Coremark)  where he worked for 20 years.  He later worked for Vitamin Research Company until his retirement in 2012.  Craig enjoyed hunting in Jarbidge Nevada with his wife Debbie and his brother in law Daniel.  He also enjoyed fishing, camping, and being outdoors and riding horses with his family and friends.  Craig loved life and lived it to the fullest.  He would do anything for his family, friends and neighbors.  He was the first person to help you, no matter what it was. He had a big heart and was loved by so many.  He will be greatly missed by all who loved him.  The lord has taken his angel home. He is proceeded in death by his father, Donald Romesburg, his mother, Carolyn Romesburg, his brother, Kurt Romesburg, and his sister, Kathy Nagy. He is survived by his loving wife of 33 years, Debbie Romesburg, of Carson City, his son, David Romesburg, of Carson City, his daughter in law, Veronica Romesburg of Carson City, his daughters, Cristal Cooper and Maria Hurst of Carson City, his son in law, Christopher Hurst of Klamath Falls Oregon, his son in law Chris Cooper, of Carson City, his brother Michael Davis of Dayton Nevada, his sister in law Trina Davis of Dayton Nevada, His grandsons, Kyle, Donald, and Ryan Hurst, and Christian Cooper of Carson City, his granddaughter, Brianna Hurst, of Carson City, His brother in laws, Raymond, Daniel and Robert of Carson City,  his sister in law Joy of Carson City, his mother in law and father in law, Robert and Eleanor Lawson, of Carson City, his nephew Joshua Romesburg of Reno Nevada,  his niece, Sierra Romesburg, his niece, Laurie Britton, his niece, Amber Miller of Reno Nevada,,  his newphew Patrick Davis of Las Vegas Nevada, his niece, Jennifer Davis, of Las Vegas, Nevada,  his nephew, Chris Scott of Reno Nevada, his Aunt, Norma Stone, of California, and many other nieces, nephews, cousins and extended family.  There will be a celebration of life for Craig on June 10, 2017 at 12:00 pm at his home.  All are welcome to come and celebrate with us as we remember a husband, father, grandfather, neighbor and friend. "The Last Ride" One tough ol’ cowboy; a strong, upright man, He rode many years for the Lazy "H" brand. One ev’nin, quite late, as he rode out from town Some bandits, they jumped him; threw him straight to the ground “Your Treasure!”, they cursed, “Or you’ll surely be dead!” And when he refused, they were quick with the lead. A slug in his hip, near the heart, through a lung Then they left him for dead, but he weren’t yet undone. Climbing back on his horse, he vowed one last fight, And touching a spur, he rode into the night. Back at the ranch were the loved ones he’d guarded But he knew deep inside that soon they’d be parted. He was one tough ol’ cowboy; yes, tougher than hide, But concerning his family, he was all soft inside. The pain ... almost blinding, his breath nearly gone But with unfinished business, he had to press on! His kin sensed his struggle, but there was nothing to do ‘Til that cowboy rode in and looked over his crew. Anxious, they watched as he surveyed his place Then he smiled his approval; Pride in his face. For the barn door was shut, the fences all mended The mangers were full; just like he’d intended. There just weren’t much more for his rough hands to do So he turned in the saddle and bid them adieu. Neither trying to stop him nor wantin’ him gone They silently watched as he rode toward the dawn. His breath now came easy, the pain gone away Ridin’ high in tall grass on a bright summer day. When he’d rubbed down his mount and made sure he was fed, He heard, “Well done cowboy!” And turning his head There stood his Savior with arms open wide. “You made them all proud when you made that last ride!”

Life Legacy Craig was born on April 17, 1956 to Donald and Carolyn Romesburg, in Carson City Nevada.  Craig lived in Carson City with his parents until he moved to Reno Nevada where he attended Wooster High School until he graduated. Craig... View Obituary & Service Information

The family of Craig David Romesburg created this Life Tributes page to make it easy to share your memories.