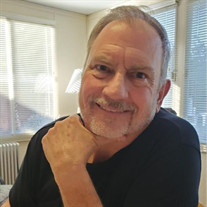 Craig’s sudden, unexpected passing 2 days after his 67th birthday has left his family devastated: son Todd, parents Marge & Russ and sister Nancy Jo. He was a man of faith, strong convictions and a firm moral compass. Growing up, family vacations were spent camping, arguing with his sister in the back seat of the station wagon over who was touching who or who was is who’s space –in the days before seat belts. Later camping included boating; Craig was a great water skier – fiercely jumping wakes on one ski; he eventually bought a ski boat of his own. He enjoyed sports and received an athletic scholarship to Long Beach State to play water polo and swim [backstroke]. He graduated with honors with a degree in psychology. He enjoyed mentoring and teaching but found that he couldn’t help someone unless they actually wanted to change. He went into the manufacturing industry [foundries], working in-side sales and later technical production manager. He enjoyed the creative work involved in making molds and parts and gifted the family with horse-hoof handled letter openers. He also had experience in construction, truck driving, apple marketing/sales, house painting & car repairs. This made him the go-to guy for advice on just about everything. Craig was a true family man: he loved spending time with his family, rather than golfing on weekends. He loved having the kids’ friends around, BBQing and was proud the kids liked to hang at his house. He said he raised his sons Kyle and Todd to be eagles – strong enough to fly the nest and he did. Tragically, we lost Kyle in a motorcycle accident in 2013. .. Craig was so proud of the fine young man Todd has become, thoughtful, knowledgeable, starting his own business. After retirement, Craig enjoyed being home, tending his garden: apple and plum trees, “ugly gourds” this year and building a greenhouse “the girls”. And oh yes, his arborvitae trees. Craig regularly visited his parents and sister in Santa Clara, completing his Mom’s to-do lists and joking with his Dad. Once or twice a year joined by dear cousin Dave and his wife Marilyn, there was a lot of laughter and fun playing cards. He loved Jake, who he considered an “adopted” son, and enjoyed motorcycle rides with Alan, breakfasts with Mark and Friday drinks with Owen, Debbie & Nancy. Craig imprinted our hearts and he is already greatly missed.

The family of Craig Richard Banko created this Life Tributes page to make it easy to share your memories.