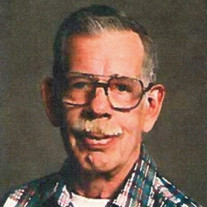 Charles Thomas Herron Sr. (Tom) Tom was born in Harrisburg Illinois on November 11, 1930 to Alba Herron and Evangeline Bergandine, he left this world on April 24, 2015. He attended school in Southern Illinois, played high school football, worked for local farmers and above ground at the local coal mine. He loved to fish and hunt as a child. He migrated to Southern California along with family members in 1947. He worked as a carpenter, in the oil fields and at a lock company. He spent a short period time in the U.S. Army and was honorably discharged. In 1950 he married Rosemary Wright and they started a family, they had 3 children, Tom Jr., Timothy Lee and Terry Lee. He enjoyed his family and spent many hours enjoying scouts, sporting events and family outings. He was devoted to his church. They moved to Lakewood California in 1963 and he worked at an auto supply company eventually opening up a successful auto repair shop. He left Southern California in 2004 after the passing of his wife and moved to Carson City to raise his grandson Edward and be close to family. He loved Northern Nevada, enjoyed camping, fishing, family trips and the outdoors, His favorite thing was to work in his yard and his flowers, spending time with his family, helping neighbors and even strangers if need be. He enjoyed his early morning breakfasts at the café in the Fandango and loved listening to his favorite band “The Rustlers”; he was a big fan and friend of all the members. He attended as many of their shows as his health allowed. He was a loving and kind man, he will be missed but he will always be with us. We love you Dad. He was preceded in death by his parents, wife Rosemary, son Tim, 2 brother and 2 sisters. He is survived by his son Tom (Linda) and daughter Terry (Bill), brothers, sisters, grandchildren and great-grandchildren. We would like to thank the nursing staff at Carson Tahoe hospital for taking excellent care of him, and also Autumn Funerals and Cremation for all their support.

The family of Charles Thomas Herron Sr. created this Life Tributes page to make it easy to share your memories.