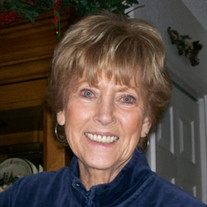 Carol E. Emmerich, 84, entered into the presence of our Lord and Savior Jesus Christ, September 27, 2015, from the comfort of her own home. She was born in Lansing Michigan on Christmas day, December 25, 1930 to Fred and Ardis Hinshaw. She was preceded in death by her parents, Sister Jean Butler, Brother Leland Hinshaw, beloved husband Paul Henry Emmerich and son Gary Emmerich. She is survived by her three children and families: Daughter Cindy Ashworth, husband Kenneth, children Matthew his wife Dana, Justin, Cassidy Francois (Ashworth) and husband Frank. Daughter: Kelly Propster, husband Patrick, children: Britannia and son Logan Soderman (great-grandson), Alexandra, Casaundra Colleton (Propster) and husband Charlie. Son: Brad Emmerich, wife Kellee, children Erin, Ethan, Jessa and Sara Carol happily married Paul April 26th, 1952. They lived back East for several years and moved to the West where they began their family. She was a loving wife, care giver, amazing mother but when her grandchildren began arriving she blossomed even more. She was lovingly known by her grandchildren and affectionately known by all as “GRAMA!” Carol’s home could always be found filled with praise music playing, an open Bible, a book that was being read, children’s games and cards ready to be played and a snack within hands reach. Her grace was an equal match to her hospitality and tenderness. Her patience and playful way with her grandchildren is unsurpassed. Often times while watching her grandchildren, her kitchen could be found in a floury mess, dough smudges on her face as they attempted to teach Grama how to bake! Those times would be followed by Old Maid, Go Fish, coloring and swimming. She and Paul would often go camping with Ken, Cindy and their kids; her grandkids: Matthew, Justin and Cassidy, where they enjoyed fishing, hiking and hanging around the camp fire, spending that quality time watching the grandchildren grow. They would often go to Hawaii and stay with Brad, Kellee and their kids: Erin, Ethan, Jessa and Sara, that was always a highlight of their year. They got to hang out at the beach, spend time telling stories where much laughter was abundant. OH and an incredible tan would always be brought home along with chocolate covered macadamia nuts. The time spent living with Pat, Kelly and their kids: Britannia, Alexandra and Casaundra, would be accompanied with vacations to Montana and many picnics in the mountains. Hikes with Grama were always fun, no matter where they were. Eternity was her hope and family was her life. Prior to the onset of Alzheimer’s/Dementia, she was always one to be filled with encouragement, words of wisdom to live by, but by far her most powerful gift was her prayer life. Her many Bibles are worn out, filled with underlined and highlighted passages and riddled with prayer requests, promises to stand on and names of people that she was interceding for. Carol was a faithful Christian woman and loved serving Jesus with all her heart. She and her husband Paul were involved in ministry and hosted a Bible study in their Las Vegas home for over 20 years before moving to Carson City where she has resided for the past 17 years. Their friends and acquaintances are incredibly numerous, even global. We are all blessed to call her Mom, Grama.

Carol E. Emmerich, 84, entered into the presence of our Lord and Savior Jesus Christ, September 27, 2015, from the comfort of her own home. She was born in Lansing Michigan on Christmas day, December 25, 1930 to Fred and Ardis Hinshaw. She... View Obituary & Service Information

The family of Carol Elaine Emmerich created this Life Tributes page to make it easy to share your memories.

Carol E. Emmerich, 84, entered into the presence of our Lord...