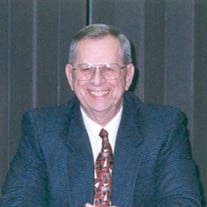 Bernhard “Barney” Randolph Dehl passed away in Carson City, Nevada, on August 27, 2013, at the age of 82. He was born in Manhattan, New York City to German immigrants, father, Arthur Paul Bernhard Dehl and mother, Johanna Henriette Mielchen Koester. He is preceded in death by his parents, his brother, Billy Logas, and sister Eleanore Logas Fanire Linquist. He is survived by his wife, Annie Ruth Crowson Dehl, his four daughters Bernice Schroer (Bradley), Darlene Loff (Scott), Diane Olvera (Mike) and Peggy Dehl (Kevin Widener), sister, Joany Legg (John), one cousin Fred Koester, 12 grandchildren,15 great grandchildren, and numerous nieces and nephews. He moved with his mother to Ohio and later settled in Kingman, Arizona. This was a hidden blessing because this is where he met a young, precocious teenager from Arkansas named Annie Ruth Crowson. He was 18, and she was 16 when they married on June 4, 1950. Barney had a lifelong career in law enforcement, having worked in various agencies. He worked as an inspector in the Arizona Motor Vehicle division. Then, as a Korean war veteran of the U.S. Army, he served as a military policeman between 1952 and 1954. He then became a deputy sheriff for the Mohave County Sheriff’s Office in Kingman, Arizona. In 1959, Barney joined the Henderson, Nevada police force and shortly thereafter was promoted to Sergeant. On April 1, 1962, he joined the Nevada Highway Patrol as a trooper and worked through the ranks from patrolman to Chief (Colonel) of the Highway Patrol. He was also appointed by Governor Mike O’Callaghan to the Nevada Crime Commission in 1970, and appointed as chairman in 1975. In 1980, Governor Bob List appointed Barney as the director of the Nevada Civil Defense. Shortly thereafter, Sheriff Bob Galli called Barney and asked him to work for him at the Washoe County Sheriff’s Office as a Chief Deputy Sheriff. While in Washoe County, he was instrumental in the planning and building of the new Washoe County jail on Parr Boulevard. He retired from Washoe County in 1993. He wasn’t retired long before Carson City Sheriff Rod Banister asked Barney to be his undersheriff. As undersheriff, he was tasked to head the task force to build the current Carson City jail on Musser Street. Barney was known throughout his distinguished career in the various law enforcement agencies for his expertise in accident investigation and reconstruction. Barney was always involved in the community. He was recognized for his remarkable dedication and distinguished service by the Carson City Library Board of Trustees, was awarded “Volunteer of the Year” in recognition and appreciation for his outstanding performance and dedication rendered to the City of Carson, was voted Kiwanian of the Year and was presented with the President’s Volunteer Service Award by the National and Community Service and USA Freedom Corps. Bernard was a graduate of the FBI Academy in Quantico, Virginia and was considered a national expert in accident investigation. He taught Criminal Justice classes at the University of Nevada, Reno and the Nevada POST Academy. His hobbies included collecting pistols and working on antique cars. He loved reading books and spending time at the fitness center with his work-out buddies. He especially enjoyed going on drives in the country with his family. He often remarked that his family was the best accomplishment of his life, and he was proud of each and every one of them. His family wishes to thank each and every friend that has touched the life of this great man and incredible father. He will be greatly missed by many.

The family of Bernhard Randolph Dehl created this Life Tributes page to make it easy to share your memories.