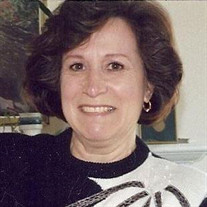 Barbara Jo Manning July 1, 1940 to May 24, 2018 Barbara was born in Los Angeles County, CA on July 1, 1940 the third of four girls. At age 5, her family moved to the Mohave Desert in Kern County, CA where she graduated from Burroughs High School. Shortly after her marriage to James Manning in August of 1959 she moved with her husband to what is now Silicon Valley. Starting in 1960 Barbara worked for various electronic companies and worked up the ladder from Production Line Worker to Quality Assurance, Computer Repair and ultimately Sales and Marketing. In her own words she “. . . went to work in a young computer industry that was dominated by men. Barbara often heard customers say, “No! I need a REAL TECHNICIAN! Please return to your office and send one of the men to repair my computer!” Barbara raised her three daughters, Robin Elaine, Rhonda Lynn, and René Anne in Los Gatos, CA. Because René was born with Down Syndrome and Barbara wanted the best for her, Barbara learned how to become a child advocate and champion for the rights of disabled citizens. When René became a teenager Barbara became a self-appointed leader for her daughter and her friends. Barbara taught a cooking class at René’s school and planned community events for René and her friends to concerts, the ballet, theater shows, the Monterey Bay Aquarium and other local trips to help enrich their lives. After René’s death in 1994, Barbara and Jim divorced and Barbara moved to Fremont, CA. While living in Fremont Barbara attended Saint Mary’s College in Moraga, CA graduating in 2005 with a BA in Business Management, the only one of her parents’ children to achieve this level of education. In 2007 Barbara moved to Nevada to be close to Rhonda and assist with raising her two young grandsons, Trevor and Tyler. While living with her daughter and grandsons, she did extensive vegetable gardening and raised several different breeds of chickens. After moving to Nevada, Barbara became more interested in her lineage and has continued her membership in DAR (Daughters of the American Revolution), and joined Colonial Dames and the US Daughters of 1812. At the time of her diagnosis, Barbara was simultaneously serving as Regent of the DAR, John C Fremont Chapter, and President for the local Colonial Dames and Daughters of 1812. Barbara was passionate about all of the arts, especially classical music. As a youth she played the Accordion and in her adult years enjoyed playing the piano. Barbara was also very passionate about family and frequently promoted family connections. Many of our family events occurred at her home in Los Gatos, CA. We will deeply miss Barbara’s elegant ways, her wonderful sense of humor and the ways she instilled culture in our lives. We are gathering at 10:00am on June 23, 2018 to celebrate Barbara’s life at Coventry Cross Episcopal Church, 1631 Esmeralda Plaza, Minden NV 89423 A reception will be held after the service at 2797 Squires Street, Minden, NV 89423

Barbara Jo Manning July 1, 1940 to May 24, 2018 Barbara was born in Los Angeles County, CA on July 1, 1940 the third of four girls. At age 5, her family moved to the Mohave Desert in Kern County, CA where she graduated from Burroughs High... View Obituary & Service Information

The family of Barbara Jo Manning created this Life Tributes page to make it easy to share your memories.