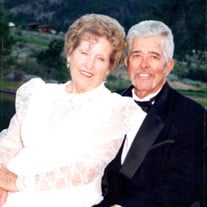 Andrew “Ray” Raymond Walmsley, a third generation Dayton, Nevada resident passed away on February 4, 2014, he was 88 years old. Ray was born on October 7, 1925 in Dayton, Nevada, the son of Zenas Andrew and Lelia (Stevenson) Walmsley. Ray grew up and attended schools in Dayton, Nevada, and worked on the family’s diary farm for many years. Later, he worked as a Heavy Equipment Operator with the AFL-CIO union for 50years. Ray married May B. Cadwallader on June 5, 1947 in Dayton, Nevada. Ray loved his community of Dayton and served as the Assistant Probation Officer for Lyon County, was the Dayton Town Council President, and a founder of the Dayton Museum. Ray was also a historian for the Nevada Magazine and was published in many articles. He served as the Fire Chief for Dayton Volunteer Fire Department and worked with search and rescue. Ray has many hobbies, he loved horses and was a Mustanger, as well as a Horsemanship leader with 4-H. He loved dogs, cats, hunting, fishing, camping, and picnics at Sand Harbor. He enjoyed playing pinochle, and cribbage. He also enjoyed square dancing, round dancing and danced with the Capital Cut-Ups. Ray is survived by his wife of 66 years, May B. Walmsley, daughter; Jerry Walmsley, and sister; Lois Hill as well as eleven nephews and five nieces. He was preceded in death by his parents Zenas and Lelia Walmsley, brother; Thomas A Walmsley, sister; Beatrice Williamson and son Eugene Raymond Walmsley.

The family of Andrew 'Ray' Walmsley created this Life Tributes page to make it easy to share your memories.