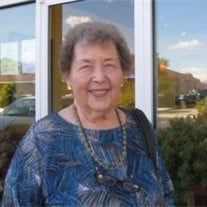 Ada Roelke, Protector of Children, Food Columnist, Dies at 87 Ada Roelke, who protected children for 30 years in California as a social worker and later in Nevada as a court¬-appointed guardian, died on August 26 at Carson¬ Tahoe Medical Center, NV. She was 87. The cause was complications following surgery for colon cancer, according to her son, Steven Leveen. Protecting children Ms. Roelke began her career in social work in San Diego, CA, after taking a vocational test that indicated she was well suited for the profession. Under her married name, Ada Leveen, she enrolled in San Diego State College (now University) and, with the help of a state stipend, earned a Master’s in Social Work. The state offered to forgive her loan after she graduated provided she work in a hardship area. In 1967 she and her children moved to Bakersfield, CA, where she worked with migrant farm worker families and became an admirer of Cesar Chavez. She returned to San Diego and worked for most of her career in child placement, making the often tough decisions of whether children should remain with their parents or be put into foster care. She once told her son, “As long as a child has one adult in their life who really loves them, and even if that adult has other problems, as they often do, and even if that adult is not a parent, that child will be okay.” Counseling was her work and her passion. Near the end of her social work career, she completed a Ph.D. at The Professional School of Psychological Studies. She counseled after work as well at Overeaters Anonymous and Alcoholics Anonymous. After retiring, Ms. Roelke moved to Carson City to be closer to her daughter’s family. She became a volunteer for the Court Appointed Special Advocates for Children (CASA) and continued to represent the rights and interests of the children who were assigned to her care. From Syracuse to snowless San Diego Ada Ellen Knock was born on August 24, 1928 to George W. and Mary Emma Knock in Cumberland, MD. The family moved to Syracuse, NY, when Ada was a toddler. Her parents were both schoolteachers, and Ada became a teacher herself after graduating from Syracuse University in 1950 with a music degree. She continued singing contralto at local churches and synagogues for several years, and enjoyed a lifelong love of opera. After her marriage to Leonard Leveen ended in divorce in 1961, she decided to move “as far from Syracuse as possible in the United States where there was never snow.” She set her two young children in the back seat of her 1957 Plymouth Plaza and drove to San Diego. There she joined the First Unitarian Church and founded Singletarians,¬¬ the church’s first singles group. Although she married two more times (to Merle E. Miller and Stephen Price), she spent the last decades of her life resolutely single. She dropped her married name of Leveen and took the last name of her maternal grandmother, Roelke. In addition to her son, she is survived by her daughter, Karen Bahnsen, and four grandchildren, Jerry Bahnsen, Cindy Bahnsen, Calgary Leveen and Corey Leveen. Champion of fine home cooking Her lifelong love of cooking led to her job as recipe columnist for the Nevada Appeal newspaper from 1997 to 2002. Many Carson City restaurant owners knew her for her practice, after dining with a keen enjoyment, of asking the chef for a favorite recipe that would be easy enough for home cooks. She would always try the recipes at home herself before putting them in her column. While she considered herself a good cook, she drew a distinction between good cooks and chefs. “Being able to prepare many different meals over many hours—¬¬that’s a whole different level of skill,” she said. The week before she went into the hospital for her scheduled surgery, she dined at Z¬Bistro, her favorite French restaurant in Carson City, reminding the chef, Gilles Galhaut, that it had been too long since he had made escargot. He promised to add it to the menu when Ada returned home from surgery. She died in the hospital the following week. Two days after Ada Roelke’s death, her family and friends gathered at Z¬Bistro to celebrate her life. With the last harvest from Ms. Roelke’s garden, Chef Gilles made an appetizer of sliced cherry tomatoes with basil. The 19 people attending raised a glass in Ada’s honor and savored their appetizers of Ada’s Escargot.

Ada Roelke, Protector of Children, Food Columnist, Dies at 87 Ada Roelke, who protected children for 30 years in California as a social worker and later in Nevada as a court¬-appointed guardian, died on August 26 at Carson¬ Tahoe Medical Center,... View Obituary & Service Information

The family of Ada Ellen Roelke created this Life Tributes page to make it easy to share your memories.